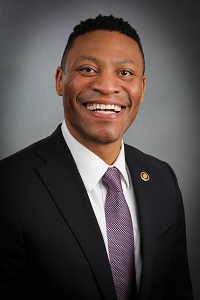 Senator Brian Williams has proudly represented the 14th Senatorial District in St. Louis County since 2018, and he currently serves as the assistant minority floor leader. Senator Williams is the first Black male to serve in the Missouri Senate in two decades. He was drawn to public service after studying government and public health policy, a passion that eventually led him to the U.S. Congress. He worked as a congressional staffer for several years and oversaw Missouri’s rollout of the Affordable Care Act (ACA) Marketplace under President Obama’s administration.

During the 2021 legislative session, Sen. Williams passed comprehensive police reforms, Senate Bills 53 & 60, into law. These sweeping criminal justice reforms established the strongest use of force database in the country; prohibit law enforcement from using a respiratory chokehold without deadly force authorization; ensure women offenders have access to free, adequate feminine hygiene products while in a correctional facility or jail; and shortened the delay to request an expungement for those who have paid their debt to society. Senator Williams also added a provision that helps set innocent people free from wrongful imprisonment. This provision allows prosecutors and circuit attorneys to file a motion to vacate convictions if they believe the convicted person is innocent, a change that was instrumental in the 2021 release of Kevin Strickland, who was wrongfully convicted and served time for over 40 years.

During the 2022 legislative session, Sen. Williams proudly secured $98 million for North St. Louis County projects, including $40 million for the University of Missouri-St. Louis to construct the “Campus of the Future;” $15 million to manufacture active pharmaceutical ingredients; $23 million to build a public safety training facility; $7 million for public transit assistance; $6 million to abate, demolish and repurpose the Jamestown Mall; $4 million to renovate the St. Louis Metro Employment and Training Center in Wellston; and $400,000 for Youth Build Works.

In addition to legislative duties, Sen. Williams serves as a board director for People’s Health Center, where he helped develop a behavioral health care center for underserved children. He is also a member of the advisory boards for St. Louis Crisis Nursery, Simmons Bank, iHeart Media, Nurses for Newborns, University City Children’s Center, Alzheimer’s Association and Refuge and Restoration.

Statewide Committees:
Task Force on the Future of Right-of-Way Management and Taxation